What you need to know about the “Drag Queen” indoctrination of children in your public libraries: Where it comes from and how they make it happen.

The American Library Association is the radical force behind the scenes across the country.

But there’s even more than that ... 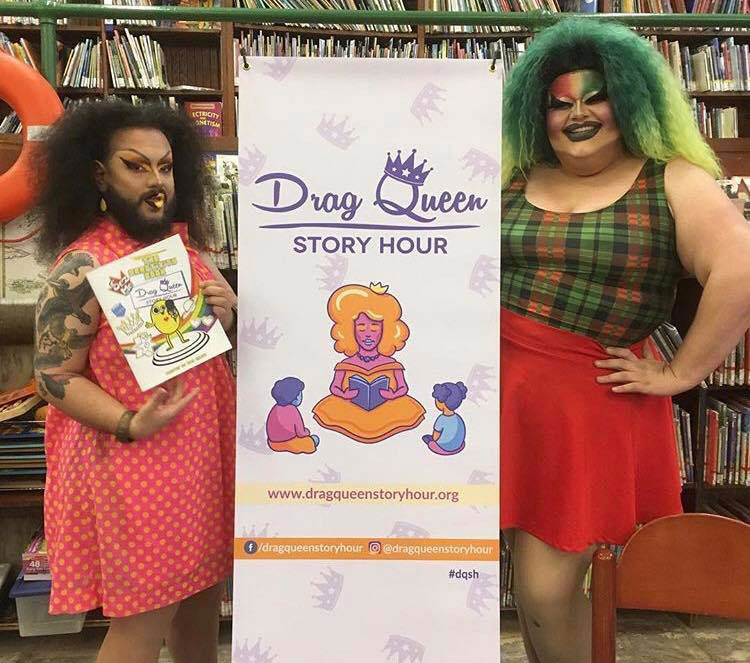 When people in a community find out that their local public library is hosting a “Drag Queen Story Hour” – bizarre men in garish women’s clothes reading LGBT-themed books to young children ages 3-8 – their first reaction is usually shock and disgust. They wonder, “How is this happening?”

Then they ask, “How can this insane thing be stopped?” Little do they know that by that time, virtually everything is already stacked against them. At every move, the supporting local officials, politicians, and even the library rules seem impenetrable, and the opposing citizens get nowhere.

So what is really going on?

Much has already been written about how hideous and destructive this program is for young children, and how the “Drag Queens” are overwhelmingly open sexual deviants (and brag about on social media), if not actual convicted sex offenders.

In the larger sense, this is the latest extension of the LGBT movement’s obsession with children, which in recent years has reached first into high schools, then into middle schools, and lately into the elementary schools. The younger they get them, the more strongly embedded will be their sick messages, they believe.

It starts with the local library staff

The library profession tends to attract very radical, pro-LGBT, social-justice types of people. We’re not sure why, but it’s clearly true. Many of these people have no children of their own and don’t see the world as most parents of young children do. Furthermore, in most areas the library officials have developed a strong influence on who sits on the local Library Boards which oversee them, and are thus generally populated with like-minded people.

Thus, the library staff sees no problem at all with these “Drag Queens” and probably feel quite positive about them being around children. Most parents don’t appreciate how perverse and abnormal this situation is. 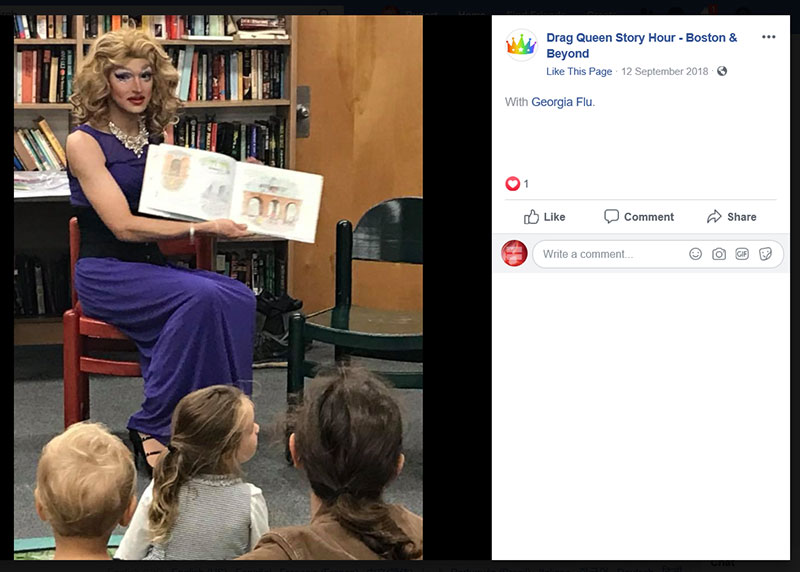 How are the “Drag Queens” recruited from their sexual underworld, then set up in these slickly promoted library events across the country with a list of books to read?  The national Drag Queen Story Hour (DQSH) group appears to be the organizational muscle behind that. Their website boasts 47 local chapters across America (including a few overseas) and there are probably more than that.

The DQSH movement started in 2015 in San Francisco. But it now appears to be run out of, or in conjunction with, the Brooklyn, NY Public Library.

LGBT-themed books for the Drag Queens to read to children. The Brooklyn Public Library has put together two lists, one for toddlers and preschoolers, and one for elementary school children. While there are a few innocuous titles (such as The Very Hungry Caterpillar), most push LGBTQ ideology. (The reader can take even an innocuous book and give it an LGBTQ twist.)

Here’s a sampling of the books: (We’ve included a few other titles from news stories on DQSH events around the country.)

“Gender” – “identity” – “transitioning”: I Am Jazz, Born Bad, I’m a Girl, Neither, It’s OK to Be Different, Be Who You Are, A Color of His Own, I Like Myself, Where Is the Green Sheep?, Introducing Teddy, A Crayon’s Story, Not Every Princess, Leonardo the Terrible Monster, Froodle

Pride: This day in June

The DQSH organization also publishes its own material for children such as The Dragtivity Book to “help adults and kids explore drag, gender, and identity together.” DQSH collaborated on the book with the drag queen enterprise, SezMe.me. That group’s website has disturbing videos with little children alongside creepy drag queens, talking about trans pronoun usage and gender fluidity.

From the back cover of "The Dragtivity Book" for children. 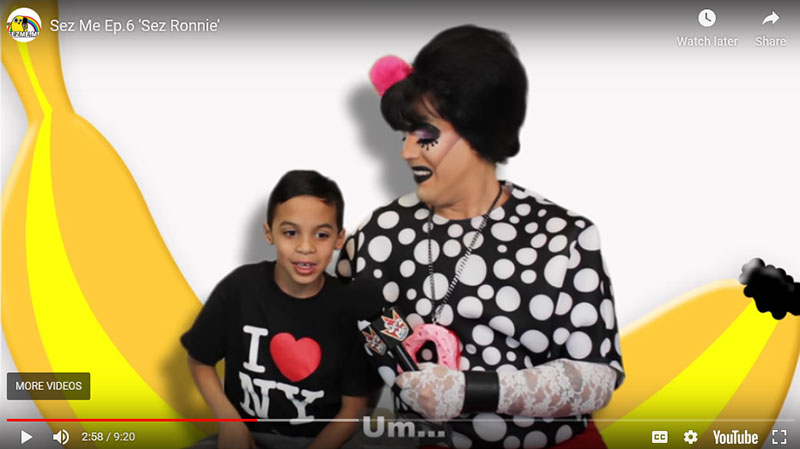 Given the ideological makeup of library staffs, it’s probably not a hard sell to get these programs into the local libraries around the country.

There is no question that the purpose of these programs is to push these perverse sexual issues into the minds of children. How does this affect children? The library staffs obviously don’t seem to care.

These “programs” are usually so bizarre and so shocking to a community that the local library staff needs well thought-out tactics and strategies for successfully steamrolling everyone who might be an obstacle – including members of the public, the media, public officials, or even other staffers. This is where the American Library Association (ALA) comes in. In fact, the ALA is clearly the most powerful force in this whole process.

Most people think of the ALA as a rather boring professional association. Nothing could be further from the truth. It is an intensely radical organization that has a strong alliance with the national LGBT movement. Folks were given a taste of that recently when The Federalist published this shocking article about the ALA’s annual conference.

The ALA website is veritable armory of articles and resources for library staff members and LGBT activists to make sure that nothing gets in the way of Drag Queen events in any public library anywhere. Thanks to a recent report at LifeSiteNews many of these have been brought to light:

This is what parents across the country are up against when “Drag Queens” come to their library to target young children.

As mentioned above, being able to "connect" with children is an obsession of the LGBT movement. Once the DQSH events are in place, local LGBT activists (including Antifa groups, whose members appear to have sexual issues) energetically mobilize to confront faltering politicial leaders or parents who rise up to oppose it. As a result, one sees a disturbing cave-in among public officials.

Pro-LGBT activists from around the region will come and bring children to these events to make it appear popular. But one rarely, if ever, sees any local parents there who are not part of that movement.

What can you do?

As bad as this may seem, there are effective counter-tactics and strategies that can be successfully used. The ALA, LGBT activists, and the local library staffs depend on parents being ignorant, somewhat frightened, and isolated. As our readers have seen, it’s not easy, but MassResistance organizes and mobilizes parents in a community to take on this fight in a way that puts the opposition off balance, and can lead to victory – as well as sending a clear message to the public officials about future activity they might consider.

Secondly, EVERY city, town, and school system should stop paying the ALA dues for its library employees. These dues are fairly expensive, and serve to fund nothing but destructive behavior.

Third, thanks largely to the ALA, these books are on local library shelves everywhere in the country, whether or not there’s a DQSH planned! Community members need to push to get this harmful LGBT propaganda out of the children’s sections of the public library. Yes: These books should be banned!

And finally, whenever these kinds of radical programs or materials pushed in a public library, this is a clear message that the community needs to take strong steps to remove the library staff responsible as well as the governing Library Board members. They need to understand what their role is – and isn’t!