Canadian tribunal fines Bill Whatcott $55,000 for expressing Christian views on "transgenderism"
Unbelievable 104-page ruling from British Columbia Human Rights Tribunal - "mis-gendering" is now a "hate crime." Watch out - this is what is coming to America! 4/3/19

Commentary: A True Pro-Family Leader Elected President of Brazil
He campaigned jokingly as “a proud homophobe.” He's about to change that country in many ways. 1/24/19

Commentary: Free Speech Is Dead in Canada: The Persecution of Christian Activist Bill Whatcott
Americans must heed the warning: compelled speech is on its way. We're already on that totalitarian road. Canada is just farther along. 1/7/19

Fearless Canadian pro-family leader Bill Whatcott takes the reins of new our Canada MassResistance chapter
Charged with “hate crimes” in Toronto and Vancouver for his pro-family stand. Video of his speech on the history of homosexual activism in Canada. 12/7/18

Shocking lessons from El Salvador for Church Warriors
Episode 6 in our 'Save our Churches' series: Dr. Robert Oscar Lopez traveled to El Salvador. What he saw changed his outlook considerably. 10/15/18

Commentary: US Dept of State pushing radical LGBT agenda around the world
Secretary of State Pompeo leading the charge. Is it too late to hope the State Department swamp will be drained of sexual radicalism? 10/1/18

Our newest chapter in Chile - fighting to stop youth transgender bill
The LGBT movement is pushing hard in South America. Bill would allow "sex change" for 14-year-olds without consent of parents. And under 14 years old with at just one parent! 8/29/18

MassResistance fighting 'gay marriage' in Costa Rica - now being forced by country's Supreme Court
The worldwide LGBT lobby is a step closer to forcing this on the people of Costa Rica. But MassResistance activists there are fighting back. 8/24/18

MassResistance-UK has some fun at the London “Gay Pride” Parade
But also quite serious. This year, some MassResistance-UK activists decided to put things in perspective with our “nope” stickers. 8/22/18 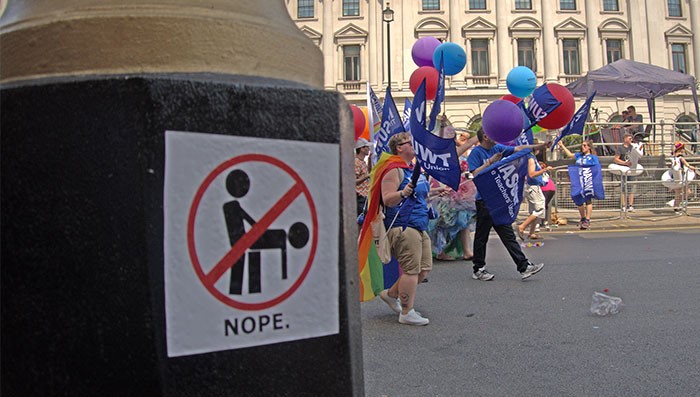 Restating the obvious: An "alternative opinion" appeared on utility poles in central London.

Pro-family activist in Canada under bizarre nationwide arrest warrant -- for passing out "anti-LGBT" flyers
Will turn himself in to police Friday. Is this what the future of the United States looks like? 6/21/18. Videos from June 22 arrest.

MassResistance-UK activist confronts the limits on freedom of speech in Britain!
LGBT agenda in the schools becoming a forbidden subject for discussion. Banned from a "free speech" conference for inquiring about the wrong topics! 6/2/18

"Be yourself: Coming out as a homophobe" in the U.K. Fighting back in an oppressive anti-family nation.
VIDEO from MassResistance in the United Kingdom:“Homophobia” is illegal in the UK and can result in arrest. Here's how our MassResistance-UK chapter deals with it! 11/21/17

Hong Kong MassResistance - our newest chapter!
Taking on the "gay marriage" fight in their country. Also part of the battle: how the government defines "transgender." 8/21/17

LGBT lawsuit against US pastor seeks to make Christian belief a 'crime against humanity' around the world
Christian teaching about LGBT behavior would become criminalized. 11/16/16 (More on SMUG vs. Lively lawsuit here.)

Another 'gay marriage' battle looming in Australia. MassResistance helping educate pro-family citizens there!
It's failed to pass numerous times in the National Parliament. But another fight is on the horizon. 10/23/16

Newest chapter: Nigeria MassResistance - taking on the battle in Africa!
Confronting the international LGBT movement out to undermine the region's culture. First chapter outside the US! 9/30/16

Movement in Finland to repeal “gay marriage” law ignites across country -- using MassResistance materials!
With a new pro-family government elected this year, the battle is gearing up across Finland with more energy than ever. 8/21/15

Analysis: What REALLY happened in Ireland's election: Massive US-funded "gay marriage" blitzkrieg as never seen before.
Nationwide vote would have surely failed otherwise. Are other countries next? This should be a wake-up call around the world. 5/28/15

Ireland national vote on “gay marriage” on May 22. Pro-family activists used MassResistance info to warn voters of consequences.
Up against millions of US “gay” dollars and overwhelming support by politicians, media, business, and liberal elite. 5/21/15